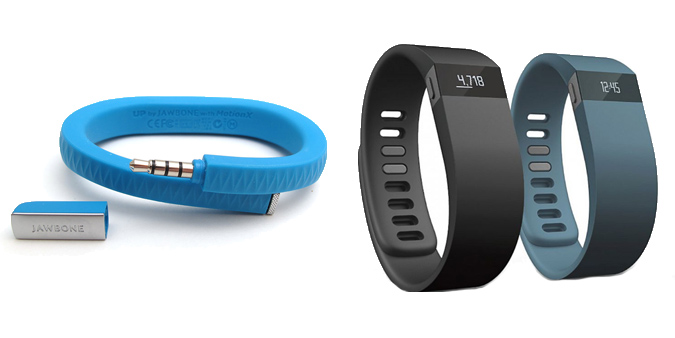 According to MyFitnessPal (the calorie tracking app I use on my smartphone), Friday was the 189th day I’ve logged in and, in that time, I’ve lost 58.3 lbs. That’s approximately 2.16 lbs. per week, or… for the quantified selfies out there, approximately .3 lbs. per day.

One nanosecond after, “You look great… I bet you feel like a different person.” (Thank you and yes, by the way.) I get asked, “How did you do it?”

I do it (present tense, I’m still doing it) with my smartphone and a fitness-tracking wristband. You can read exactly how at smartphonediet.info or watch my TEDx Talk.

In order to calculate calories in and calories out you need two tools:

But Which Jawbone vs. Which Fitbit?

I have now used all of the most popular fitness-tracking wristbands and I offer the following observations.

The Jawbone UP has been around for a while. It is not a Bluetooth device; you sync and charge it by removing a small cap and plugging it into a custom charger with a standard USB plug on one side and a special headphone jack on the other. To sync the Jawbone UP, you plug it into the headphone jack of your smartphone. The UP works with iDevices and many (but not all) Android devices. Check the compatibility list before you buy this device – if you have an incompatible smartphone, you are completely out of luck. Jawbone cannot help you. Compatibility has to do with the way the phone’s headphone jack functions, not the Jawbone UP band.

I like this band because I can wear it all the time. It’s not waterproof, but it is very splash-resistant so you can wear the band almost all the time. I usually charge it while I’m in the shower, but I’ve also charged it while driving or sitting at my desk. It doesn’t take very long to charge.

One last thing about the Jawbone UP. Many people complain that the units fail often and, although Jawbone is very good about replacing them, it is still an serious inconvenience. I am on my second UP band, some people I know are on their third and forth. I don’t think the units are particularly robust, but I can say that I wear mine all the time and I’m very, very hard on it – actually, considering what I do to these bands, I’m amazed that each one lasts as long as it does.

This is the latest and greatest wristband from Jawbone. It’s Bluetooth, comes in two colors and is supposed to be more accurate and more awesome than the original Jawbone UP. Sadly, the UP24 app for Android has not yet arrived, so for now, the UP24 is iDevice only.

Are you interested in syncing via Bluetooth? If so, this is your band. I don’t think it’s an important feature. In fact, when considering the other Bluetooth devices I need to sync to my smartphone, I think it’s a huge pain – but that’s just me. If you’re an iPhone person and you’ve been dreaming of a Bluetooth UP, it’s here.

Fitbit has made a whole bunch of dongles and small fobs that can be placed in bracelets or worn using clips. The Fitbit One has a display, but it is not splash or water resistant … and I have put several of these devices in my pocket, forgotten to take them out and washed them. Fitbits don’t like to be placed in a washing machine.

I like the functionality of the Fitbit One, but the ergonomics don’t work for me. I don’t like the clip; I’ve explained my unhappiness with putting it in my pocket and wearing it on my wrist is aesthetically offensive to me. I’m not a fan. That said, female friends have told me that they clip it to their bra straps and get excellent results. I have no way to verify this, but I’ve been told several times by several different people.

The Flex was Fitbit’s answer to the Jawbone UP. It’s awesome. Although it does not have a display, it has indicator lights that let you know how you’re doing. Like all Fitbits, when you get within about 20 feet of the computer where you’ve plugged in the Fitbit USB dongle, the unit will sync with your computer and you can see the Fitbit dashboard, which has a comprehensive readout of what the Fitbit has been measuring.

The Flex is water-resistant, so you can really get it wet. I like the Fitbit Flex a lot and recommend it as strongly as I recommend my Jawbone UP.

The Force is Fitbit’s all-singing, all-dancing wristband. It has a display, Bluetooth 4.0, uber-compatibility, does everything every Fitbit device does and everything that every Jawbone device does.

One downside is that it is splash-resistant, not water-resistant. Although the device is marketed as water-resistant, the altimeter will malfunction if you submerge the unit – so don’t submerge it! I can personally attest to this issue.

Secondly, some people have complained (some bitterly) about a curious rash that they believe is caused by the rubber bracelet. Fitbit has issued some refunds and says it is, “investigating the causes of the rashes.”

You need to monitor your calories in, your calories out and your sleep. All of the devices by Jawbone and Fitbit will help you accomplish these goals. I’m partial to the original Jawbone UP because it is small, unobtrusive, and I don’t have to think about it. That said, I like the Fitbit Force because when I’m really in the mood to watch what I’m doing, all the info I want is right on my wrist. Depending on the day, this can be a huge plus.

In the end, what you buy will be more about your personality than the features and benefits of the wristband you choose. Like I said, they will all do the job… if you do yours. Choose the wristband that you are most likely to use all the time, one you will only take off to charge or sync. Remember: no matter how pretty or interesting the device is, it is useless unless you use it 24/7.

Visit www.smartphonediet.info to learn more about how you can use your smartphone and a few relatively inexpensive devices to lose weight, feel great and stay fit forever. And, if you’re really serious about living a healthier lifestyle, invest in a Fitbit, a Jawbone or any other monitoring device you can commit to use. It will really change your life.